I haven't written a yarn review on this blog before, but this yarn deserves a bit of wider coverage ... if only because I so love the concept! Local yarn shop. Local sheep. Local dye. Local history. If you like local, this yarn has it all.


Let's start with the shop. After running a successful internet business, last November Victoria Beech and her family moved from London to open Cafe Knit's first wool and coffee shop in picturesque, medieval Lavenham. Cafe Knit stocks a wonderful array of yarns and patterns, tools and buttons, and is also a place to sit and browse a knitting magazine (or newspaper) over a leisurely latte and cake. :D


As you first enter Lavenham you can't fail to notice the timber-framed buildings which were built when the town was at the centre of the textile trade. By 1524 it was one of the wealthiest places in Britain because it exported as far as Russia and the Middle East. Its most renowned cloth was Lavenham Blue (or Blewes) Broadcloth, a plain, heavy wool fabric, measuring 28yd 28in long by 5ft 3in wide, and dyed blue with woad.

Victoria told me "As soon as we became more aware of Lavenham and its rich wool history, it was one of my ambitions to recreate Lavenham Blue yarn, as it was Lavenham Blue Broad Cloth that brought the village such wealth back in the 1500s. The response so far to the yarn has been brilliant, I think people love the idea of this yarn that is steeped in history!!!"


The yarn is from Marion Knights at Stoneweaving, an active member of the Lavenham Guild of Spinners, Dyers and Weavers and uses fleece from Leicester Longwool sheep. The flock belong to Jo and Mark Tavernor of Apple Tree Cottage in Felsham, only about 8 miles from Lavenham, and as well as using the fibres in her work, Marion also helps out at lambing and shearing time. Lavenham Longwools are  on the rare Breeds Survival Trust Category 2 endangered list, which means there are only between 300 to 500 left, and the gene pool is so low that breeding programmes have to be carefully worked out to prevent inbreeding.

Look at that fleece! How gorgeous is this sheep?

In the middle ages, woad was the go-to dye for blue, until it was gradually replaced by imported indigo from Asia - although woad is more colour-fast, indigo produces a deeper shade than woad. The Celtic Iceni tribe (Boudica was their Queen), used the blue dye obtained from woad leaves to paint swirling patterns and religious symbols on their skin prior to going into battle. With its mildly antiseptic properties it probably gave some protection against minor wounds, but it also scared their opponents, the Romans. (In Scotland the Picts also painted themselves with woad - the word 'pict' means 'painted' in the Celtic language.) The woad used in Cafe Knit's Lavenham Blue was grown in Norfolk, home of Boudica and the Iceni tribe.

These are my 'before and after' stocking stitch swatches - the 'after' swatch is on top in the photo. After blocking, the tension stayed at 22 stitches and 30 rows to 10cm (very satisfying). Although my fingers became pale blue while knitting, no dye came out of the swatch in the washing process. It washed out of my fingers easily though - phew! When knitting it felt a little rougher than I would have expected, but after washing the swatch was softer and slightly fluffier than before - I'm very pleased with the result. I also know it felts up really well, as I saw a felted bag in the Cafe Knit shop when I visited. Get the feeling this yarn will be a regular addition to my stash, especially now there is a 2Ply version too! :D 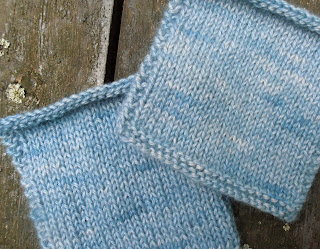 If you are tempted to buy Lavenham Blue DK, or the 2Ply version, Cafe Knit is offering a 15% discount on all purchases in store or online from now until midnight on Tuesday 5th June 2012. Simply mention the offer in the shop or use the following discount code at the checkout: CKJubilee


The next installment of this blog will be published to coincide with my new design, Iceni Mitts. I'm sure Boudica would have worn mitts in Lavenham Blue ... if knitting had been invented in the first century! Here is a taster ... 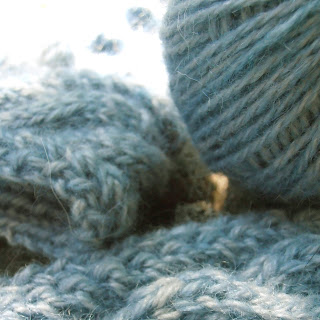